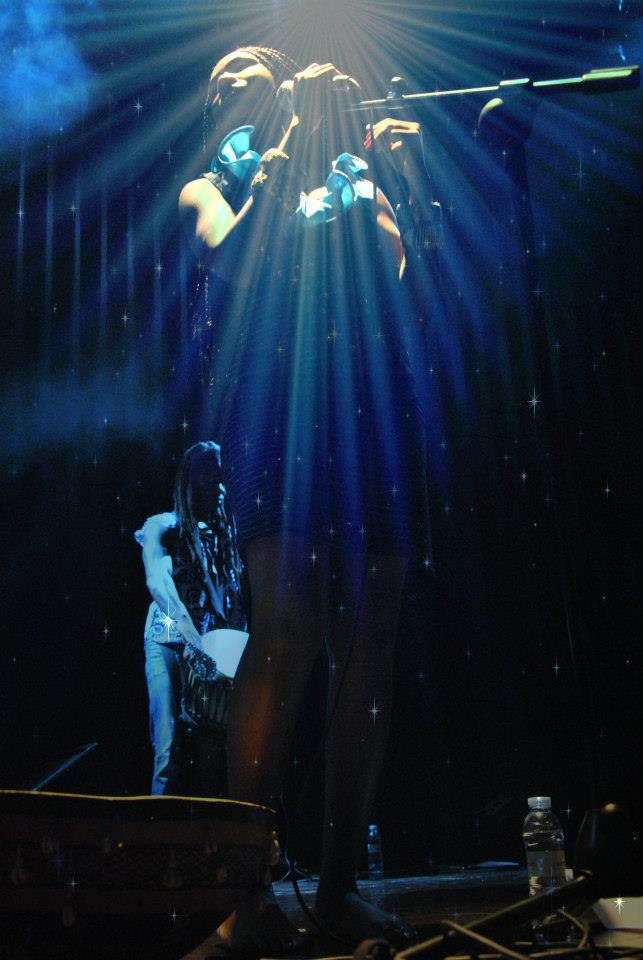 African music and roots from Guinea Conakry immersed in pop and mandingo ventures into other styles like soukous, mbalax or afro-reggae writed in mandinga, susu or wolof. New album Naka, On Tour right now.

Nakany Kanté was born in 1991 in Guinea Conakry in a family where it was not allowed to become a singer. She composes music since age 8, and that it has no artistic background. African music and roots immersed in pop and mandingo ventures into other styles like soukous, mbalax or afro-reggae writed in mandinga, susu or wolof from love stories with exacerbated romanticism to songs of women encouragement or workers through personal experience. But her talent was not developed until moved to Barcelona in 2009. Nakany Kanté was selling food in the street with her grandmother when she met ended up being her husband, Daniel Aguilar, catalonian percussionist from Sabadell. The meeting was in his hometown, Siguiri, Guinea Conakry, Mali border and home to the Mandingo music teachers as Sékouba Bambino, member of Bembeya Jazz and one of the vocalist of Africando.

Nakany has grown in this environment. When it arrives to Barcelona starts her musical project with traditional roots. Little by little it is contacting the catalan music scene and participates in different projects as Afroesfera 2011.

The next year she collaborated with the great percussionist Koungbana Condé at the International Percussion Festival of Barcelona and is selected by the Diversons Cycle of the La Caixa Foundation conducting twenty concerts in different spanish cities.

In 2013 she recorded her first work with the seal Saramaya Slow Walk Music, specializing in african music made in Barcelona. An ambitious album that reflects the evolution of this young artist, who without giving up their roots, immersed in pop and mandingo ventures into other styles like soukous, mbalax or afro-reggae with excellent results, showing her artistic restlessness and broadmindedness.

Nakany has supervised all phases of work, from composition to recording, mixing and mastering, with Daniel Aguilar in the pre-production and Fernando Redondo ‘Dinky’ in the final production. All songs have been composed by Nakany Kanté, assisted in the arrangements for Kalildaf Sangaré, Drissa Diarra and Daniel Aguilar. And it has been surrounded by great partners such as saxophonist Jimmy Jeank (Buena Vista Social Club, Jarabe de Palo, etc), percussionists like Oumar Tounkara (Rokia Traoré) and Max Moya (ManExMaqina, Ojos de Brujo), and some of the most important musicians of african scene in Barcelona and David Maestro (guitar), Kwame Adzraku (drums), Gustavo ‘Tato’ Sassone (percussion), Djibril Ngom (sabar) and Michel Ndione (vocals).

As for the lyrics, written in mandinga, susu or wolof also move in different registers, from love stories with exacerbated romanticism (in Kalikantigne) to songs of women encouragement (in Segue) or workers (in Bara ), through personal experience, obviously (in Saramaya).

And it does so with a debut album freshly cooked, ‘Saramaya’. While the album shows a young talented artist, its strength lies in strong direct loaded high doses of energy. A job that makes us very proud to present and publicize.

Nakany Kanté has played in many places and festivals around the world like Spain, France, Austria, Australia, …

«Naka» (new album)
A work that reflects its evolution in recent years. Since submitting his 1st album, Saramaya in 2014, her music has been a big jump. Without losing the traditional base, strengthens the concept of Pop Malinke.

In the letters continue to show their social concern, reveals some personal experiences that have marked his life, explores the african popular sayings, speaks of fate, revenge, truth and falsehood, forgiveness, temporality … and protest against inequality between men and women and the abandonment of street children.

Direct is undoubtedly strong, with a compact band helps draw from it its light and talent. It must be the reason that has come to No. 5 of the 2015 National Best Live according Rockdelux.

Nakany has taken his first album in France, England, Austria and Guinea Conakry, for festivals like Rototom, Jazz and the City (Au.), Festival Mandengue (Fr.), Mercat de Música Vica de Vic, Fimpt, Mas i Mas Festival, Fusión Contemporánea, shared with Toumani Diabate a night in the Periferias Festival, has been invited to the Vilette of Paris by Oumou Sangaré and also by Lucy Duran and Toby Green at SOAS University of London.

His songs have reached the Top Ten on televisions and radios Conakry. She is going to be one of the greatests world music musician. We love Nakany Kanté and sure you will too.